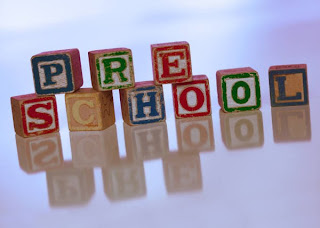 Today was the first day of the 2009/2010 preschool year. For those of you not in the know, I am the administrative assistant for my church’s children’s ministry department which includes our preschool. I do a lot of the paperwork to free up Leanne, the Director, to do other, more directory-type things and to help the teachers out. That’s the general description of my preschool duties anyway.

My plan was to get in the shower at 7:00 this morning, leaving me enough time to eat breakfast and pack a lunch before I headed out early for work. Sookie had other plans, however.

The kids had left for school; Todd ran to Wawa for breakfast for himself, coffee for me; and the dog was outside. We have an invisible fence and I don’t like leaving her outside while I’m in the shower if no one else is home so I opened the door and called her in. She spared a glance for me and then went back to whatever it was she had been doing. Stalking small children, no doubt.

After pleading and cajoling and trying to rationalize with a dog I finally had to go out to the yard to get her. Our side yard on the corner which is very visible. In my warm, pink robe and my fuzzy pink slippers.

Go ahead. Get that picture firmly established in your head.

So there I was, in the middle of the yard – the very dewy yard – arguing with a canine with the neighbors driving by and waving and I’m pretty sure they were laughing. At what, I have no idea. But Sookie thought I was out there to play. Because, you know, I often go out in public covered from head to toe in pink fluff.

I thought maybe I could lure her in with one of her toys. The purple ball. Yes! That’s it! So I grabbed the ball and dangled it in front of her as though it was a carrot. Dangit if she’s not so stealthy and quick because before I knew it she was running away with the purple ball.

Then I tried the new blue ball that she has become enamored with and taunted her with that. She stood over the purple ball and looked at the blue ball, clearly undecided as to what she should do. As she tried to make up her mind I slowly crept closer to her, careful to dodge the poop, thinking she was so confusiated that I could grab her collar and be done with it. She waited until I almost reached her and then she took off running, wanting me to chase after her. I had to disappoint her there. I rarely chase her when I’m dressed. I certainly wasn’t going to chase her in my bathrobe. The neighbors had had enough entertainment for one morning.

So I stomped back to the house, muttering something about stupid dogs and showers that should have been finished by now. There were other things muttered as well, but I’m not going to share those with you because I don’t want you to know the real me.

Then it happened. One of those rare flashes of genius that only come along every great once in a while. Cheese puffs. She’s a hairy, four-legged cheese puff fiend. I stood on the deck, noisily opened the bag and barely got, “cheese puff” out of my mouth before she was sitting at my feet with that glazed look reserved for drug addicts jonesing for a hit. Score!

Finally I got her in the house and took my shower. I didn’t have time to eat breakfast or pack my lunch, but I did get a delicious 26 oz. coffee out of the deal so I couldn’t complain too much. And I made it to work on time and got everything printed and distributed and the day went pretty smoothly.

Now that I know the secret I need to keep a steady supply of cheesepuffs to keep her in her habit. Then she’ll be helpless against my will. Mwahahahahahahaha….