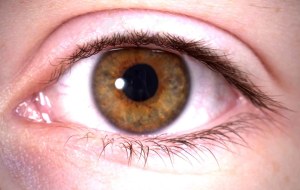 I’ve always had a  like/dislike relationship with my eyes. On the one hand, I’ve always liked the shape of my eyes. They’re maybe not as large as I would like, but they have a nice almond appearance. On the other hand, however, I’ve always disliked the deep circles under my eyes. They’re not deep set exactly, but the hollows under my eyes are very pronounced. It only takes a quick look at my eyes to know if I’m exhausted or sick. When someone looks at my eyes they don’t see the nice shape of them. Instead they see the depressions above my cheekbones. And I won’t even go into the color (diarrhea brown).

So as I’m having this “blech” moment this morning, the image of a friend’s daughter popped into my head. She’s blind. She could care less about the shape of her eyes or the valley beneath them or their color. To say I felt about as big as the tiniest ant would be an understatement. And it gave me my “thankful” subject for today.

I’m thankful for my sight. Not just the fact that I have pretty good vision, but the fact that I see the world around me. I’m thankful for the incredible beauty that surrounds me every day. The other day as I was driving home from work I was so overwhelmed by the dazzling autumn scenery I nearly had to force myself to breathe. The sun was setting behind me and the reds and golds and oranges scattered across the rolling pastures looked almost to be on fire. If that wasn’t enough there was the slightest hint of a rainbow in the east. Such a rare gift and I was blessed beyond imagination to see it. I got a glimpse of God’s glory and it was magnificent.

My friend’s daughter will never get to see the blazing hues of fall or the brilliant colors of a rainbow and for that I’m sorry. However, she’s okay with it. Don’t get me wrong. I’m pretty sure she has moment when she wishes she could see what the hubbub is all about. But she can hear things most of us never will, no matter how hard we strain. She plays the piano with an effortless ease and it’s all by ear. The most important thing, though? She’s happy. And for that I’m thankful.